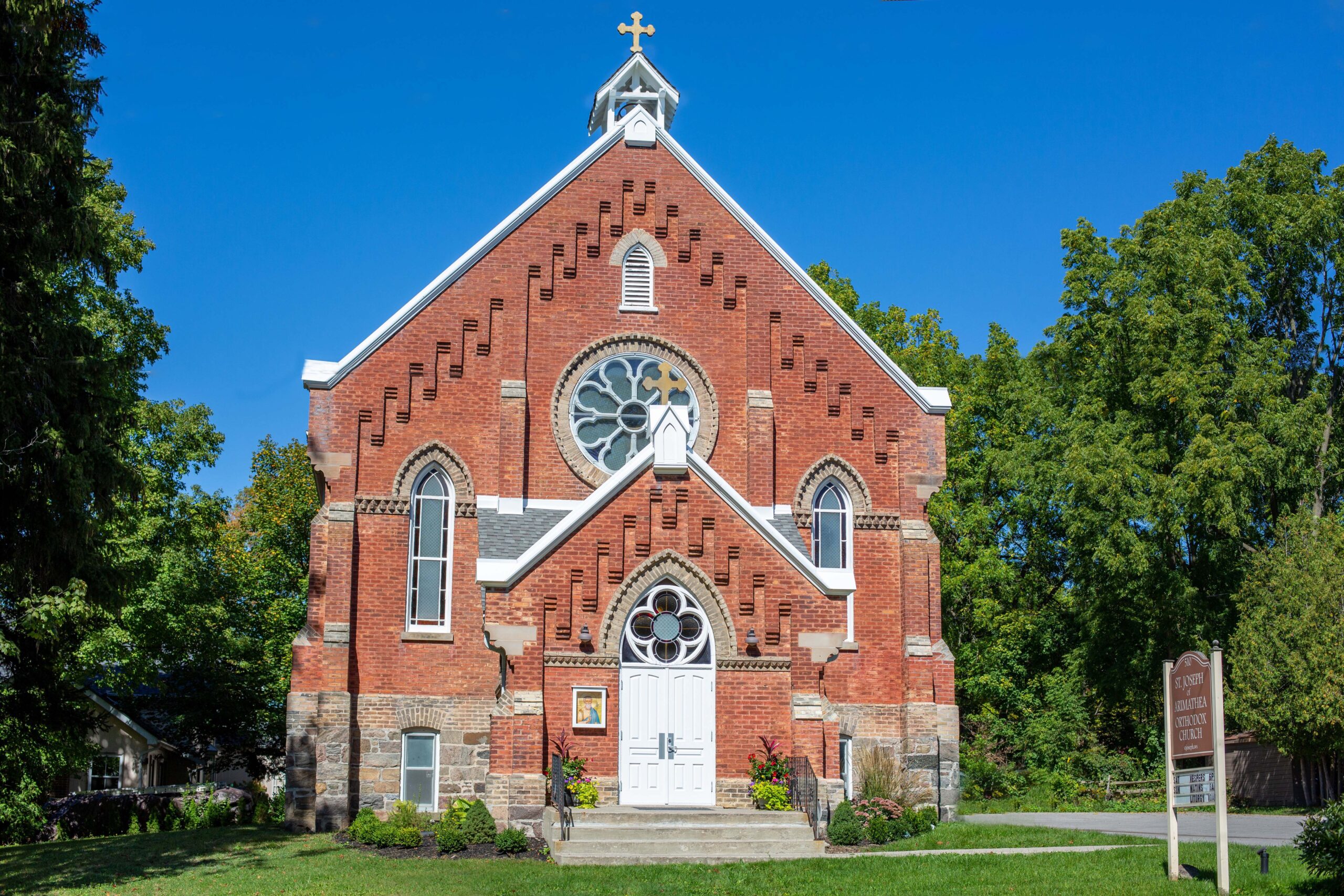 In the 1980’s, there were more than thirty Orthodox churches of many different ethnic origins in Toronto. However, none of the parishes ministered directly to the English-speaking youth and Orthodox converts within the city. In response to this need, the Parish of Saint Joseph of Arimathea Orthodox Church was formed.

In 1981, Father David Belden initiated an English-language Orthodox ministry in a small Chapel at Hart House on the grounds of University of Toronto, Canada’s largest university. Both students of the University and others interested in Orthodoxy and English language Orthodox services were attracted to the weekly Vespers, Liturgy, and lectures. There followed four fruitful years of Orthodox ministry at the University of Toronto. During this time fifteen people were received into the Church and the seeds of the Orthodox Faith began to grow.

The faithful came from various backgrounds and joined together with Father David in his missionary work to preach the Orthodox Faith and to celebrate the Divine Services. And soon, with God’s help, a small congregation was formed.

As our understanding and love for Holy Orthodoxy continued to grow, our small group felt an increasing desire to establish a permanent home for our community. With more people attending, we continually expanded the cycle of Services with Vigils and Feast day services, and it became apparent that the foundation for something more permanent was now possible.

After one Sunday Liturgy, the congregation discussed which holy Saint the community should have as its Patron. Several suggestions were considered and then the name of Saint Joseph of Arimathea was put forward. Those present recognized a miracle as each person immediately joined in consensus that Saint Joseph was indeed the best Patron and Protector for the small flock. As the Scriptures witness, Saint Joseph received instruction by night in our Saviour’s teachings, gave Him burial, participated in the awesome economy of God’s salvation, and then preached of Christ’s glorious resurrection in many lands. From receiving instruction at the very side of our Saviour, even to his missionary preaching to the English, Saint Joseph continues in his prayers for the faithful now. And he continues to guide and protect this English-speaking flock.

The Founding of Saint Joseph Parish
With the guidance of Father David, the new Parish of Saint Joseph was founded under the omophorion, and with the blessing, of the then Archbishop Vitaly of Montreal and Canada (later raised to Metropolitan of the Russian Orthodox Church Abroad). In August, 1985, we met with Father Panagiotis Carras, Protopresbyter of St Nektarios Orthodox Cathedral in Toronto. He invited us to establish a chapel within the facilities at St Nektarios Church. A month later, after preparation of the chapel, the first Liturgy in the “little cave,” as the chapel fondly came to be known, was celebrated. The new home was so much more than just a suitable location for our Divine Services – it also enabled us to learn from the spiritual experience and Orthodox practice of the St Nektarios clergy and faithful.

In 1988, one of the original founding members of St Joseph Church, Leonid Ignatieff, reposed in peace. Leonid had been a professor at the University of Toronto, and his father, Count Paul Ignatieff, had been the Minister of Education under Czar Saint Nicholas II of Russia. How we loved Leonid, who, though born of a renowned and respected Russian family, and well-versed in the Orthodox Slavonic services, was a determined champion for English-language Orthodox services and greatly supported and encouraged the faithful of the Parish.

Another of our beloved early parishioners was Nicholas Menard – a family man, a veteran of World War II, a and former Roman Catholic. Nicholas, at the age of 65, was baptized an Orthodox Christian at St Joseph Parish. In 1989, he was hospitalized with a serious heart condition, and on the Feast of St Chariton (October 3/16), he was tonsured – the first monk from St Joseph Parish – taking the name of Father Martin. Although he had not been able to speak or write for some days, after the tonsure he wrote in large letters on a pad of paper: “My name is Father Martin. I am very happy. I love you all in Christ.” Father Martin reposed in the Lord on the Feast of the Icon “Joy of all who Sorrow” on Oct 24/Nov 6, 1989. Eternal be his memory!

In 1989, His Eminence Auxentios, Archbishop of Athens and primate of the True Orthodox Church of Greece, presided over the Orthodox Conference in Toronto. Parishioners and youth of the local Churches of St Nektarios, the Mother of God of Prusa, and St Joseph, and from other parishes in Canada and the United States, participated in the Conference. By this time the Parish had grown to 65 members.

Opening of the New St Joseph Church building – 1995
The Parish continued to develop and maintain a full cycle of services and to participate in Orthodox conference and lecture series together with the St Nektarios Church. After nine years in our “little-cave” chapel, the St Joseph of Arimathea Parish found a suitable property in North York to establish a new Church building. The property included a small house with a large garage attached in a pleasant residential area. Through the prayers and labour of Father David, Presbytera Justina, and the parishioners, the building was completely renovated, resulting in a beautiful Church for worship, together with a Church Hall, office, kitchen, church yard, and a parking lot. The opening of the new Church was at the first service on Sunday of the Holy Cross, on March 26, 1995, and over 300 faithful on that momentous date.

Orthodox Worship and Life at Saint Joseph and the Sisterhood of Saint Barbara
As the life and worship of the Church grew and developed in the new building, the parishioners, with one accord, supported and worked to expand Church activities, and our Saviour responded with many blessings. The Sisterhood of Saint Barbara was soon founded with a primary goal to help the poor and provide support for those in need. In addition to assisting with many tasks within the Church itself, the ladies of the Sisterhood raise funds through the weekly coffee hour, bake sales, garage sales, and through sponsorship of community activities. Through their work, the Sisterhood assists other small parishes and also distributes alms to many in need, through its annual food drive and other outreach activities within the Toronto area.

Over the years, the number of parishioners continued to grow, climbing to over one hundred fifty faithful in usual attendance at Sunday Liturgy. Father David continued his missionary work, corresponding with many inquirers about the faith, including contacts he had in Africa. Our Saviour blessed Father David’s work abundantly, and it became instrumental in the reception of many hundreds of Orthodox faithful in Uganda and Kenya in 2000.

Many parishioners have been edified and strengthened on various pilgrimages. In 2004, a group of eleven parishioners traveled together with other faithful from Vancouver and the United States to the Holy Land, venerating at the Holy places where Our Saviour was born, worked so many miracles, and where He worked our salvation through His Sacred Passion and Resurrection.

Twentieth Anniversary
In May, 2005, on the Sunday of the Myrrh-Bearers, Father David and the faithful celebrated the Parish’s 20th anniversary. On Oct 2/Sept 19, 2005, we celebrated a Service of Thanksgiving, honoring Fr. David as he retired from his duties as parish priest after serving the flock at Saint Joseph for more than twenty years. Fr. David now continues his sacred ministry at the St Nektarios Cathedral.

Another New Church Building – 2009
As we were no longer able to fit the Parishioners in the Church, the Parish began investigating the possibility of finding a new building, one where we could worship in one building instead of spilling over into the house adjoining the church. The New Church Initiative was formed, and the search for a suitable, affordable property began. After viewing several properties and investigating various options, a building was found in September, 2009. The Parish voted in favour of the purchasing the new building. The parishioners of the Parish committed to provide financing, if needed.

In October, the old building was sold, and then the work of remodeling the new church building began in earnest. It took many weeks and long hours to convert the former Protestant church, built about 1870, to be suitable for Orthodox worship. Parishioners and friends of the Parish worked hard constructing 24 foot high walls, removing pews, constructing closets and side rooms, and enlarging the parking lot. On January 31, 2010, and after many miracles, the new church in Whitevale, Ontario, a hamlet of Pickering, opened on the Sunday of the Prodigal Son. Over 350 people attended.

As our congregation completes our 25th year, we first thank Our Saviour and His holy Mother for their blessings and protection, and we ask our patron, Saint Joseph of Arimathea, to continue to intercede for us and to guide us on the true path of Holy Orthodoxy.

Glory to God for all things. Amen